How do you lose a match in which you were up a set and a break…without losing a single game in the process?

That’s the question Novak Djokovic might be asking himself today.

Up to that point in the match, Sam Querrey had won a grand total of…10 points.

Just look at the numbers from that first set: 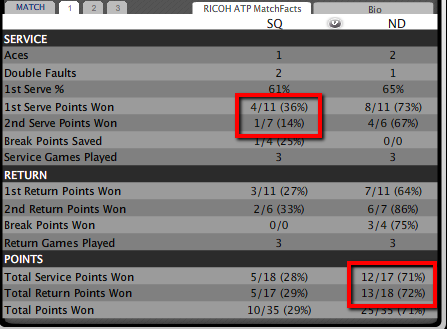 Statistics don’t get much more violent than that. Notice the solitary ace in that set for Querrey.

And it wasn’t only about the numbers: Djokovic showed an array of beautiful shots that reminded me of Brad Gilbert’s “tip jar” concept: when someone is getting schooled so badly that they need to pay for the lesson afterwards. There were running forehand winners, incredible returns of good Querrey first serves, and a glorious, Nalbandián-esque angled forehand winner that was simply obscene.

However, down 0-2 in the second set, Sam Querrey started going for more on his serves and his groundies, and finally held. He sarcastically raised his arms after he accomplished such an (apparently) minor feat, to the delight of the crowd. Djokovic then played a sloppy service game, and the break advantage disappeared.

The Serb’s level had dipped slightly, but Querrey had already started the turnaround that would eventually win him the match. Look at the numbers for the second set: 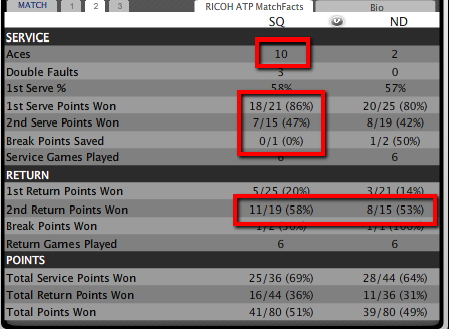 Querrey went from 1 ace in the first set, to 10 in the second. From winning 36% of the points played with his first serve, to 86%. From winning just 14% of second serve points, to 47%. But the most surprising statistic development was the difference in points won by whoever returned second serves: Sam Querrey, not known for being a great returner of any kind, was edging the best returner of serve on planet, 58% to 53%.

Think about it. Sam Querrey was winning a higher percentage of second serve return points than Novak Djokovic.

Coupled with Querrey’s improved serving, you can see how the American didn’t face another break point after losing his serve to start the second set.

The biggest moment in this shape-shifting middle set came at 5-all in the tiebreaker: Djokovic set up a point to finish it with his trusty backhand down the line…and missed. By at least a foot. That handed Sam Querrey the last minibreak he needed (he had wasted an earlier minibreak by double-faulting), and he played a very composed point to clinch the set when a Djokovic forehand clipped the letcord and landed wide.

The third set was more of a scrap, but again, the numbers tell an interesting story: 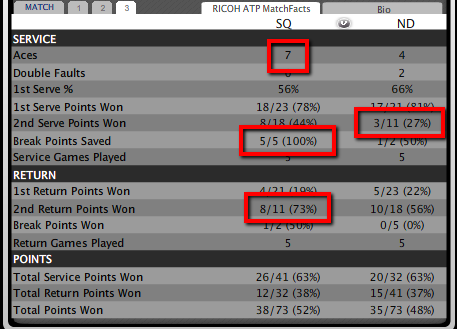 Querrey kept the bombs coming, but the key in this set was dropping those aces right as he needed them: to save a few of those five break points he faced. That’s the sign of a confident player, and once Sam Querrey got the break back in the second set, you could see in his body language that he wasn’t going away. Which was quite refreshing to see, given his 0-7 head-to-head record vs the top 10 guys this year (only 10 and 35 for his career), and his 8 and 6 record on M1000 play in 2012

However notice something else in those stats: Querrey won 8 of 11 points played on Djokovic’s second serve. That’s impressive. He did to Djokovic what Djokovic does to pretty much everyone else – apply loads of pressure on that second delivery. Which paid off in the fifth game of the third set, as Querrey broke to take a 3-2 lead.

The last bit of nerves had to come at 5-4, 40-15: Querrey was probably thinking that Djokovic could very well pull out one of his Houdini-like escapes, after the Serb saved the first match point with a very aggressive return up the middle. But Querrey went back to the baseline, and dropped a bomb of a serve up the T that Djokovic could only float long. The turnaround was complete, and Sam Querrey had completed what is probably the biggest win of his career.

As he had since the moment he drew level in the second set, Sam Querrey came up with the right shots at the right time. And that’s what you need to do when you are trying to beat one of the two best players on the planet. Much easier said than done.

Now for a bit of context: reports arose yesterday about how Djokovic had to fly to Serbia on Sunday to check on his dad, who had been rushed to the hospital with what seems like a serious condition. Djokovic also had postponed an interactive chat with his fans set for Monday because of “not feeling well”, and as the Blic report linked above shows, he might have been going through some health problems of his own this week.

Still, Djokovic was up 6-0, 2-0 in this match. His level dropped only slightly, and Sam Querrey did everything he could to take advantage of it. The American responded well to the challenges he faced in the third set, when he fended off five break points. It was impressive to see Querrey carry himself so confidently – even after being trashed for a little over a set, and the strides he’s made on the return of serve are quite noticeable. This bodes well for someone who I’ve always thought had everything necessary to become a consistent top 15 guy, with occasional visits to the top 10.

Maybe this win will spur him in that direction, provided he doesn’t sit on any glass tables from now on. 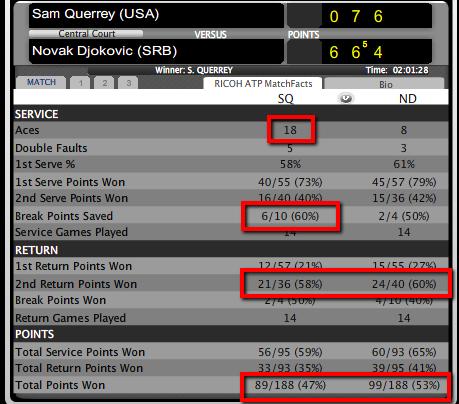