You are here: Home / How the Match Was Won: Serena Williams def. Agnieszka Radwanska, 6-2, 6-1

How the Match Was Won: Serena Williams def. Agnieszka Radwanska, 6-2, 6-1

Yesterday, Agnieszka Radwanska started her last round robin match against Sara Errani at around 6:30 pm Istanbul time. She then partook in the longest WTA Championships match in history. It lasted 3 hours and 29 minutes, and it was an epic struggle. So, she got off the court at around 10:00 pm. You know the drill: players have to wash up, get a massage and treatment for any lingering injuries, and face the press before they can leave. It usually takes around two hours for them to complete this process. So it’s safe to say Radwanska left the Istabul arena at around midnight.

Today Agnieszka Radwanska got on court at 3:00 pm Istanbul time, since the WTA decided to schedule only one of the doubles semifinals before the singles semifinals. Why? Who knows. That means Radwanska was back on court just 17 hours after finishing a historically lengthy match. Radwanska was also coming off three matches in four days, since the WTA decided to start proceedings in Istanbul on Tuesday instead of Sunday or Monday (For more about the scheduling during this tournament, click here).

So Radwanska showed up to the arena in Istanbul with little rest and having spent over 8 hours on court over four days (she played a 3 hour and 12 minute match against Sharapova on Wednesday). Who was her rival in the semifinal? Serena Williams, one of the greatest tennis players of all time, who hasn’t lost in forever, had the day off on Friday, and won all three matches this week in straight sets.

I took about three pages worth of notes, but sometimes the context of a match explains the outcome much more succinctly. Radwanska couldn’t get any depth on her shots (or on her serve- I wrote down “Easy return winner” by Serena six times), and seemed to run out of gas on most of the long-ish rallies. The Ninja was weary, and it showed. Not to take anything away from Serena Williams, who barely broke a sweat, and looked like a Formula One car cruising along the racetrack at around 35 mph; she was as good as she needed to be to get the job done efficiently.

A slow-moving Radwanska in press: “Those last two
matches really killed me, especially that I didn’t
have the day off. I really need that.”

Not to say that a rested and refreshed Radwanska would’ve beaten Serena: it’s a terrible match-up for the Polish ninja, since Serena moves so well around the court and hits with so much pace off both wings. Also, Serena doesn’t take lightly to very slow second serves, or in this case, slow first serves – Radwanska was serving 67% 1st serves in the first set, mostly because she was taking off some pace to protect avoid having to hit a 2nd serve. Very often Serena hit a safe, deep shot and Radwanska could only muster a very short reply or a lob. Serena did miss one overhead, but she put plenty of them away.

In such a lopsided affair, we did get one highlight (besides all the easy winners by Serena): at 2-all, Radwanska somehow wins a beauty of a cat and mouse point even though Serena had an overhead midway through (she hit it straight at Radwanska).

At 3-1 in the second set, Lindsay Davenport said that you just can’t let Serena stand on the baseline with loads of time to hit whatever shot she wants to hit. That was a fairly accurate diagnosis of the Ninja’s problems. Radwanska was getting no depth, and she couldn’t hang on in rallies long enough to change the direction of shots in a meaningful way.

After the 61 minute beatdown mercifully ended, Serena took the first question of the on-court interview to remark on how she knew Radwanska had been on court for about 8 hours, so she was aware of her advantage there.

Can’t argue with her there. Or with this: 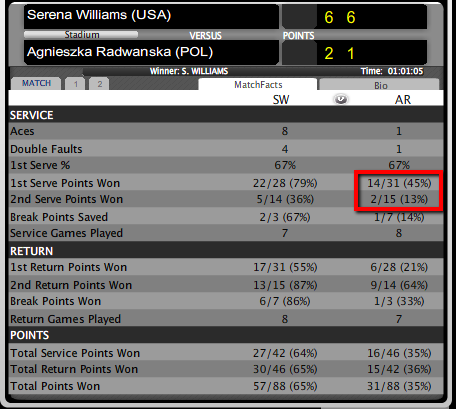 Previous Entry: Friday Rant – The Scheduling at the WTA Championships
Next Entry: How the Match Was Won: Maria Sharapova def. Victoria Azarenka, 6-4, 6-2.