How the Match Was Won: Serena Williams def. Maria Sharapova 6-4, 6-3

The recently (in)famous Barry Flatman had this to say about the person interviewing Serena Williams during the trophy ceremony on Sunday in Istanbul:

I am very sorry but this announcer interviewing Serena in Istanbul is taking sycophancy to new levels. Gush gush gush. Be professional

Oops. Man, congratulating someone who just won four out of the six biggest trophies available for women’s tennis in 2012 and lost all of four matches all year is apparently a big problem for Barry. Which is a shame, because Serena Williams, who accomplished such a feat, deserves all the gushing available.

Just not yet. First let’s gush about Maria Sharapova.

The Russian followed up her impressive performance against her frequent tormentor Victoria Azarenka on Saturday by playing at a very high level today. She served well, played some incredible defense at times, and even dared to send more than a few return winners past Serena. The eventual champion even applauded one of them at 30-0, 4-3 in the second set. The forehand down-the-line missile was that good.

Sharapova never looked defeated, and always gave it everything she had. She fought like a madwoman. Yet all she had to show for her troubles was seven games. She didn’t create a single break point on Serena’s serve, and only got to deuce once.

The main issue for Sharapova is that she’ll always be mismatched against Serena Williams. When a top player has to play at around an “A” level merely to be competitive with another top player, that’s the definition of a tennis mismatch. Watching this final today I was reminded of one of the saddest tennis mismatches in recent history: whenever Andy Roddick played Roger Federer (Lindsay, do not click here). Whenever they met, it was always evident that Roddick had to raise his level to almost impossible standards to merely bother Federer.  Likewise for Sharapova, who has to serve incredibly well (today she served 70% 1st serves and won 69% of the points played with that delivery) merely to avoid a blowout, give what was happening with her 2nd serve: Sharapova played 31 points with it, and she won only 6 of them – good for 29%.

That’s where the mismatch starts: as soon as Sharapova misses a 1st serve, her odds of winning the point go down dramatically. If Serena doesn’t pull an Agassi-esque outright winner, she will get a very aggressive return in play, pushing Sharapova away from the baseline. Once that initial blow has been struck, it’s always difficult for Sharapova to get back on the baseline and attack. She’s completely at Serena’s mercy.

The other key battleground where Sharapova gets routed is on Serena’s serve. Like Federer against Roddick, you get the sense that Serena has way too many sweet spots when Sharapova is returning her serve. Particularly when going for the corners. Great servers have accuracy as well as pace, and that’s what makes Serena’s serve so dominant, and the fact that she has the same toss for every serve (like Sampras) makes her delivery extremely hard to anticipate. Sharapova’s lack of agility also hurts her when she has to reach for those corner serves. But let’s let the numbers do the talking:

– Serena Williams lined up to serve 9 times today. 50 points were played in those service games. Maria Sharapova managed to win only 13 of those points. In case you were wondering, that’s good for 26%. Barely over one point per service game.

Still, Maria Sharapova did everything in her power to keep herself within striking distance, as evidenced by this little piece of data shown by ESPN:

At 30-all,1st game of the 2nd set, Sharapova and Serena have the same number of UFEs: 11. But, a good Serena return and it’s BP.

Think about that. Sharapova and Serena played a very tight, closer-than-you-think first set, and the UFE was not only low (for them), but level. Yet Serena Williams was up a set – without having faced a break point – and was about to break Sharapova for the first time in the second set. Which she did. Sharapova managed to stay within striking distance, all the way up her last service game – where Serena unloaded on four straight winners (three of them of the return variety) – but at the same time she didn’t come close to delivering that proverbial strike.

Speaking on a personal note, following these WTA Championships has been unforgettable for two things: the epic Kerber-Azarenka match last Wednesday, and the chance to fully appreciate the greatness of Serena Williams. People talk about how great of an athlete she is, and they’re right. But she’s also the most skilled tennis player out there. Her easy power off both wings, her serve (a pure tennis stroke) and her return as well as her court coverage put her on a class of her own. Never mind the fact that she showed up to Istanbul without having played since the US Open, yet she managed to romp through the Elite 8 field without losing a set. That’s just otherworldly.

Sorry for being unprofessional, Barry, but that’s just how it is.

As a final salute to her impressive win today, the final stats for the match: 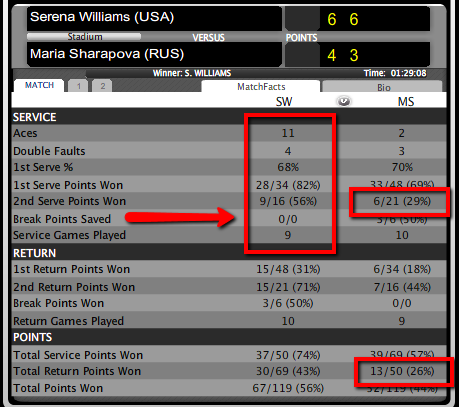