The Valencia Final started two hours after the very eventful Basel final got underway, and at the same time as the very significant women’s final in Istanbul was starting. Basel and the WTA Championships had the big names, so Valencia received very little attention. Which is unfortunate, because it ended up being quite a fascinating final. 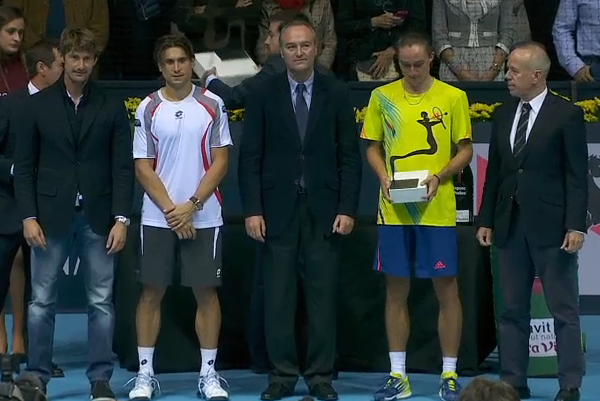 The point I want to make with the picture above is simple: Alexandr Dolgopolov could have very well spoiled the Ferrer-Ferrero-Valencia Bromance on Sunday and ended up with the trophy. He had clear opportunities to do so, and at 3-all in the 3rd set, he was looking like the better player. The upset seemed quite plausible.

In that fateful seventh game, with Ferrer serving, Dolgopolov was presented with two break point opportunities. He played the first one extremely well…until the last two shots.

But let’s back up a bit.

The final in that strange yet beautiful venue in Valencia was the sixth meeting between these two, all within the last two years. Ferrer had a 4-1 edge coming in, having won all three of their hardcourt matches. A bigger gulf can be found in their career appearances in finals: this was Ferrer’s 32nd final of his illustrious career, but only Dolgopolov’s 5th. Ferrer has won six titles just in 2012 – Dolgopolov, only two in his whole ATP life.

One little career factoid might shed light into why Ferrer was even more heavily favored in this match: Since 2009, Ferrer has lost 9 finals, but only two against non-big 4 guys: Buenos Aires (L to Ferrero) and Bastad (L to Soderling – ranked #5 at the time). He’s money against the rank and file of the ATP.

Plus, Ferrer was playing at home. At the tournament he co-owns.

Regardless, the match showed a lot of promise early on: both Ferrer and Dolgopolov had to fend off break points in their first service games. However, Dolgopolov went into the tank after that, illustrating why he’s the ultimate feast or famine ATP player: capable of the sublime one point, but also of the utterly foolish the next. The forehand unforced error that gave Ferrer the first break at 1-all was more fitting to a Challenger event than to the final of an ATP 500. Dolgopolov wouldn’t win another game in the set.

Ferrer was his steady self, and was trying to forced Dolgopolov to hit on the run on almost every point. The tournament co-owner looked to dictate with his FH and yank Dolgopolov from side to side. This was met with very little resistance by the Ukranian.

So, after what seemed like 15 minutes, Ferrer sealed a 6-1 breadstick, and it seemed like the Valencia crowd was in for a dud of a final. Little did they know what would happen next.

Dolgopolov, who is not working with the eccentric Aussie Jack Reader anymore, regained the form that brought him to this particular final, and stopped the rut with a thud.

After holding for 1-0, Dolgopolov broke Ferrer with an array of winners that shushed the Valencia crowd with their astonishing ease. It was all so fast, and it was all so vicious. From that point forward, Dolgopolov was more proactive, more focused, and his game just soared. Which is problematic even for the fifth best player in the world. Such are Dolgopolov’s talents.

The Ukranian has become a sort of a folk hero for his propensity to indulge in shots that people struggle to describe, and for his utter unpredictability. No one said it better than Rafael Nadal earlier this year, after beating the Ukranian in the 4th round of Indian Wells:

As Nadal says, you never know what Dolgopolov will do from point to point. However, what this match showed me was that Dolgopolov’s incredible feel for the ball also translates to very sound elements for contemporary tennis: he can generate power with ease off both wings, his 1st serve can go in any number of directions without a lack of pace. And I don’t think anybody in the ATP changes the direction of the ball with the violence used routinely by Dolgopolov. We know that Novak Djokovic is the best at changing the direction of shots, but he likes to probe more, looking to out-manoeuvre instead of  overpower. When Dolgopolov changes the direction of the ball, it’s almost always a ferocious shot. Which never ceases to amaze.

Dolgopolov also returns very well, his backhand down the line is a thing of beauty, and he defends with the agility you’d expect out of his slight frame. My favorite thing about Dolgopolov, though, might be how willing he is to stay close to the baseline, no matter what transpires in a rally. When Dolgopolov is fully engaged, he’s like Agassi on LSD.

Here’s a handy graph,courtesy of the ATP broadcast, to illustrate this last point: 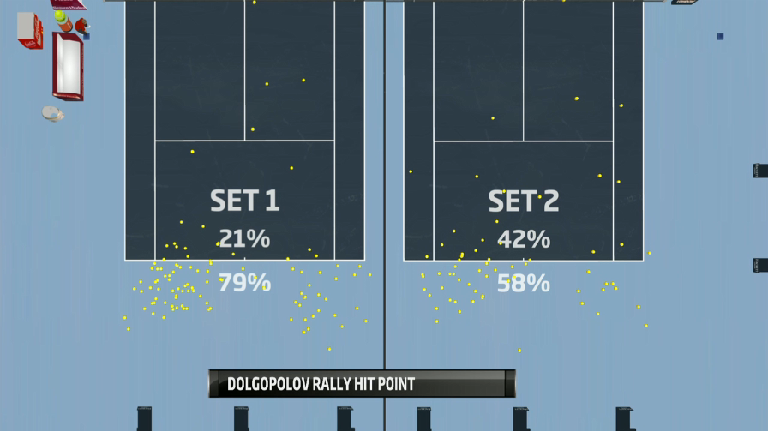 Once Dolgopolov regained the focus he lost in that opening set, he played some gorgeous points. The kind that lend themselves to games like this one:

At 3-1 Dolgopolov blasts a backhand down the line missile for 15-0. It was so good Ferrer stood and watched. Next point? Crazy forehand winner from the middle of the court into Ferrer’s backhand corner. That winner travelled at 150 kph. Then an ace. And another to hold. During the changeover Jason Goodall said that the game we just saw was the first time Dolgopolov played at the same level he’s shown all week.

Dolgopolov cruised to the end of the set, posting these numbers: 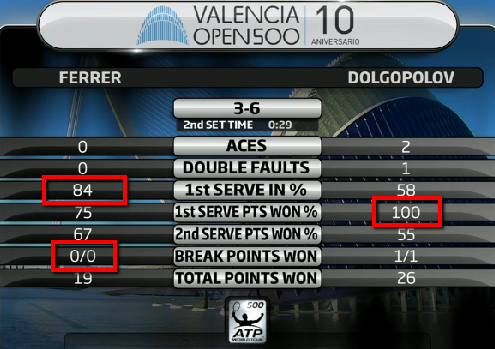 Watching this, I arrived at the conclusion that the only thing holding Alexandr Dolgopolov back might be a question of hunger. Because with him it’s not a matter of talent – the only minor hole I see with his game is his occasionally flimsy second serve. To me, Dolgopolov has the ability to do everything needed to succeed on a tennis court in this particular era. At the very highest level. There are times when he’s fully engaged where you just feel overwhelmed by his sheer ability with a tennis racquet. And the violence of his shots. You end up writing notes like these:

By the early stages of the third set, Ferrer had stopped being proactive with his own forehand, and was becoming more and more passive. Exactly like he plays against the elite of the ATP, and the main reason why someone as dogged as the Spaniard hasn’t won a single M1000 crown. It seemed almost inevitable that Ferrer would end up as the runner up in the tournament he co-owns. But, as fate (or that ever-so-crucial seventh game) would have it, Juan Carlos Ferrero’s business partner got the last laugh on Sunday.

In the seventh game, Dolgopolov took advantage of two unforced errors by a very rattled Ferrer and set up two break points at 15-40 on the Spaniard’s serve. What followed was an incredible rally, in which Dolgopolov had the upper hand right up until the last shot. He hit an unbelievably fierce cross-court forehand which Ferrer could only leave short. Faced with the short ball, Dolgopolov made his first mistake: instead of opting for the open ad court, he went straight back at Ferrer, who had enough time to float a forehand passing shot down the line. Dolgopolov had a play on it, but let it go, which ended up being a pivotal moment in the match: the ball landed smack on the line. At the time, this felt ominous.

Still, there was another break point, which Ferrer played beautifully, by going back to his bread and butter: being aggressive with his forehand from his backhand corner. Two more purposeful points from Ferrer, and he had escaped. I typed “The match was lost in that game” on my notes file.

Dolgopolov looked irritated, but managed to hold serve and get to deuce on Ferrer’s serve at 4-all. Ferrer even had to play incredible defense to avoid a 0-30 hole earlier in the game. The tussle ended after a couple of deuces and a fantastic exchange that ended with a head-scratching volley attempt by Dolgopolov. Jason Goodall spent the entire changeover ranting about it.

What followed was a sloppy game by Dolgopolov, who surely couldn’t get the missed opportunities out of his head. All Ferrer needed was a look at a 2nd serve at 30-all to force match point, and then a decent return was dumped into the net by Dolgopolov’s forehand.

That was the first break point opportunity Ferrer had created since the end of the first set.

I really wonder what Alexandr Dolgopolov thinks his own ceiling is. Does he see himself as a top 10 player? A top 5 player? A top 20 player? An occasional winner of smaller tournaments, or a winner of M1000s and Grand Slams? It really is up to him to figure out the answer to that question, because that’s all it is: a question about his perception of his own abilities. It’s most definitely not a question of talent.

Dolgopolov has gone back to being trained by his father, whom he thanked in the trophy ceremony, saying this was their first week back together. If the pairing results in Dolgopolov realizing he could turn into a top 5 player, watch out.

After all, for the most part of two sets, Dolgopolov had the current world number 5 at his mercy.