I was very tempted to make this a “How the Match Was Lost”. I really was. After all, Michael Llodra dominated the first set. Actually, “dominated” might be an understatement. Just look at the stats: 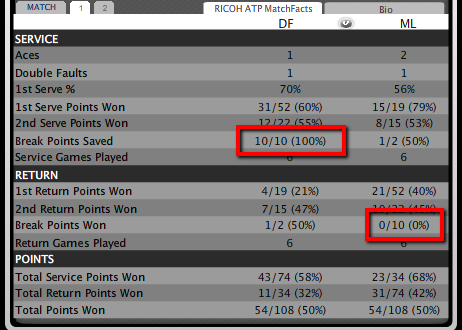 Yep, you read that right. Michael Llodra created ten (TEN!) break point chances. But he couldn’t convert a single one. On the other hand, Ferrer converted just his second break point opportunity. And the set was over.

I couldn’t help but feel like this was like watching one of those bad Arsenal soccer games where the Gunners enjoy all the possession, create about 15 clear-cut chances to score…and lose 0-1.

When you create that many break point chances, you have to win the set, no? Well, it’s never that simple.

The reason this is still a “How the Match Was Won” is because I don’t feel Llodra played any of those break points badly. David Ferrer just managed to come up with great shots to survive each and every single one of those ten moments where he could have dropped his serve. And given how well Llodra was playing, he needed to come up with all sorts of clutch shots to fend off the Frenchman: timely service winners, incredible replies to very good Llodra returns, and a lot of great passing shots, off both wings. It was an epic display of survival instincts, because the siege laid by the Frenchman was truly overwhelming.

It really looked ominous for Ferrer, because it was clear from the start that Michael Llodra was as close as you can come to red-lining. The serve-and-volleyer was coming in after everything, blasting backhand winners, chip and charging on Ferrer second serve points, and finishing at net with exquisite touch. It’s the kind of tennis that makes TV commentators drool. Of course, we got the token “serve and volley tennis isn’t dead! Look how uncomfortable Ferrer is! These baseliners aren’t used to this kind of thing! There is room for serve and volley in contemporary tennis!” gush fest.

When the commentator remarked about how modern baseliners aren’t used to the constant aggression of a serve and volleyer like Llodra, he’s right. What he fails to add to this statement is that it takes around a set for a good contemporary baseliner to adjust to a serve and volleyer’s patterns. And the reason this happens is because too many elements in the game of tennis are stacked in favor of the baseliner: a player like Ferrer has more than enough time (due to the slower, higher-bouncing surfaces), and too much control on his returns (due to racquet technology and modern strings) to consistently lose to a serve and volleyer, even when he’s In The Zone, like Llodra was for most of that first set. Because the serves aren’t designed to be aces, there are more chances for returns. And the more returns a baseliner hits, the better he gets at them.

Which is exactly what happened in this match.

In the twelfth game of the first set, after Ferrer had survived all ten of those break points, Llodra made just a mistake – he dumped a makeable volley into the net. Yet he lost his serve anyway: twice Llodra served to Ferrer’s backhand from the ad court, and twice he lost the point because of a fantastic down-the-line return by Ferrer, who had picked up on this serving pattern. Let there be no mistake: going for that serve was the right move by Llodra. The lefty slider out wide combined with a net approach makes sense. It’s a solid play.

But in today’s tennis, it’s a low-percentage play. The serves need to be absolutely perfect to work. And in both cases in this game, they just weren’t good enough.

You could sense the air coming out of the Paris Bercy arena after the first set ended with Ferrer’s great return. It was like the final whistle in the soccer match alluded above. It was over.

To emphasize this last point, Ferrer quickly went up a break, 2-0. Suddenly, the Valencia co-owner and winner was holding serve easily. The siege on his service games had stopped. Llodra, whose level had dropped somewhat dramatically, called the trainer after that early break for what can only be described as a spa massage in front of millions of people. Even the lights were dimmed.

Sadly for him, it didn’t help. Llodra immediately went down a second break, 0-4.

The Frenchman would have one last hurrah, playing a picture-perfect return game to get one of the break backs and serve at 1-4, but it was too little, too late. Ferrer held his ground for the rest of the set, didn’t face a break point, and clinched a spot in tomorrow’s final.

It’s now or never for Ferrer, who even though is playing as well as he’s ever played, is 30 years old and has to know he won’t get many more chances to win that elusive first M1000 trophy. It will be his fourth final of this kind, second on hardcourts. And this time he won’t have to deal with Andy Murray or Rafael Nadal as his opponent.

But as we’ve seen this week (Exhibit A, Exhibit B and Exhibit C), that might not be such a great thing, either. 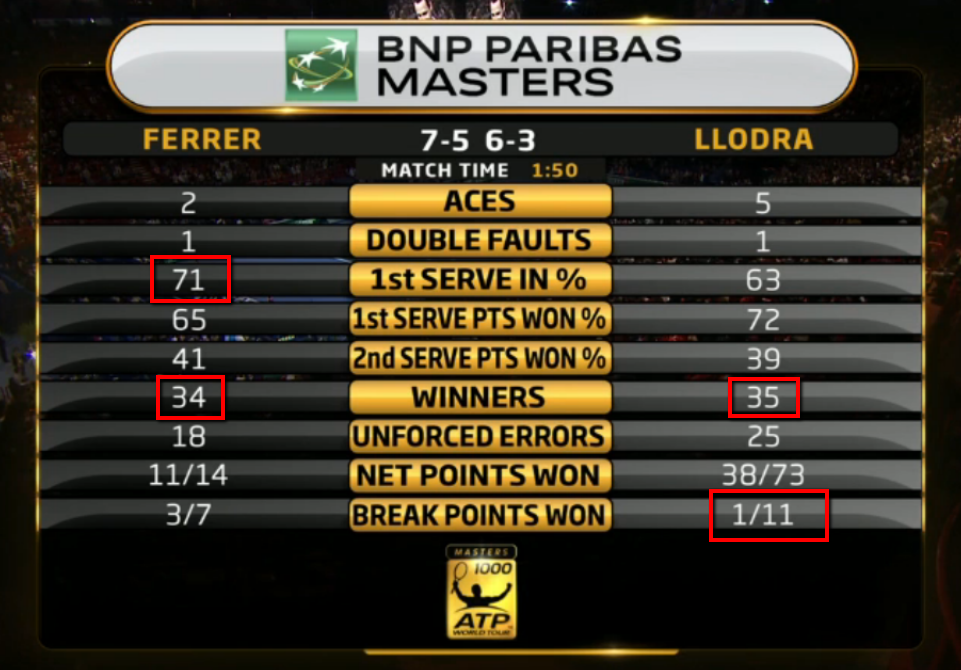