Despite all the the aces, the forehand winners and yes, those beautiful drop shots, what struck me the most about this particular semifinal was the difference in composure of the two men set to compete in it. Jerzy Janowicz played this match as if deep down he knew his time had finally arrived. The Pole looked calm and poised throughout. As if this wasn’t his first ever M1000 semifinal, but his tenth or eleventh.

On the other end of the court, Gilles Simon was noticeably tense. He looked intimidated, even. It was mildly shocking to see that a former top 10 player in front of his home crowd, looked like a nervy underdog who wasn’t sure he belonged on such a stage.

It was also strange to see a veteran player come out and play a big semifinal like the one today without much of a game plan other than “get into crosscourt backhand rallies and see what happens”.

Maybe Simon felt he was the heavy favorite (he wasn’t, given what Janowicz had done to a better version of him two days ago), and should dispatch this youngster who had to play qualies to be here. Maybe. But more than that, Gilles Simon looked like someone who was heading to the gallows. And felt helpless upon realizing his fate.

The match had an ominous start for the home favorite: he missed a first serve, and then could only watch as his second delivery was crushed past him.

Swagger Tennis was in the house.

Unlike yesterday, when Janowicz played a very poor first service game that ended up costing him the set, the Pole was fully ready and engaged from the get-go, looking to extend his – improbable – undefeated record in main-draw M1000 play.

More proof that Swagger Tennis had landed in Paris? Janowicz hit one of his patented second serve return dropshots…in that first Simon service game. It didn’t work, but that’s hardly important. When you try such a play, you’re sending a message. A message of intimidation.

How was this match won? With confidence, mainly. With belief in who you are, with a steely determination to impose your game over your opponent, and of course, with many great shots. To boot:

– Janowicz used his wicked slider serve from the deuce court quite effectively. He noticed early on that Simon had no answer for it, so he kept going there and collecting points. It was like going past “Go” in Monopoly. Related fact: Simon never created a break point opportunity in the entire match.

– The unsponsored Pole (#SponsorJerzy) was very smart about the use of his favorite shot, his forehand. Against Murray he went almost exclusively cross-court during rallies and putaways, but he showed in the Tipsarevic match that he could go down the line just as easily. More importantly, Janowicz showed today the ability to create angles from the middle of the court. We know that modern tennis is essentially a battle of who can control points from the middle of the court and Janowicz seemed quite comfortable doing so.

About that forehand: It’s just incredible how much power Janowicz gets off that shot, with what seems like the most effortless swing out there. Makes Berdych’s forehand seem labored in comparison, and that was my standard for “forehands that generate power like it’s nothing”. Also, Janowicz might give Del Potro a run for his money on the running crosscourt missile forehand: at 5-3, 40-15 Janowicz hit one that clocked in at 150 kph.

Looking at the bigger picture, I wrote down this note at the beginning of the second set: in Janowicz, we might be seeing the next transcendental forehand in tennis. Mainly because of all the different things he can do with it: can dominate points with it, can defend with it, can generate power easily, can finish points cross-court, down the line, inside out, inside-in and yes, hit gorgeous drop-shots off that wing. I like how Janowicz hits his forehand on the run, and the way he puts extra spin on defensive forehands to give himself more time to get ready for his opponent’s next shot. I also like his forehand return, both to attack second serves and to contain first serves.

Sure, some forehands go sailing five feet long. But what I like is that when that happens, Janowicz seems untroubled: he knows that he’ll hit good forehands more often than not, so why get antsy after a bad one. Again, Swagger Tennis.

Back to the match:

– In a worrisome sign for the ATP, it’s pretty incredible how well Janowicz has done with slow second serves. It all starts with his court position: firmly on the baseline, and moving forward to hit that kind of return. Couple this with his great timing, and you see how he’s obliterated so many second serves this week. And it doesn’t matter where that second serve is going: Janowicz is an equal opportunity aggressor, and will punish second serves just as easily with his backhand as he does with his forehand.

And that’s when he doesn’t try to hit a drop shot off of it.

As I wrote above, Janowicz started the match with a return winner. He also clinched the early break in the first set with a return winner. These are not accidents. And what I find the most remarkable is that this type of aggression doesn’t seem forced at all. You watch Janowicz tower over the ball and smack a return past someone, and it seems like it’s the common sense thing to do. It doesn’t feel like a reckless shot at all.

– The drop-shots. Here is another area where Jerzy Janowicz is a sort of paradigm-shifter (the other being his unreal movement). For some strange reason, the dropper is the most stigmatized and polarizing shot in tennis. It’s the classic “great if it works, you’re a moron if it doesn’t” shot. Roger Federer called it a “panic shot” and refused to hit any until three years ago, when he was 28 years old.

Novak Djokovic used to be pilloried for his use of drop shots. And to be fair, some of it was deserved: Djokovic was the king of the bail-out dropper: when a point was going nowhere that’s when the dropper came. It didn’t help that a large chunk of his attempts went meekly into the net. Of course, this narrative changed after his incredible 2011 season, when he was way more judicious about the use of the dropper.

Yesterday against Tipsarevic, the day before against Murray and at various points today, the commentators were quite eager to suggest that Janowicz had to change his patterns of play, that he shouldn’t play so many droppers, that it’s such a risky shot, etc, etc. They fail to see the context and the purpose of the Janowicz drop shots.

For starters, it’s not a panic shot. On the contrary: It’s a supremely cocky shot. And when you can hit drop shots with such immaculate technique off both wings…why not set up points to use this weapon? Because that’s the key: Janowicz sets up his drop shots. They almost always come after either a deep return or a deep groundstroke, so his opponent will inevitably be behind the baseline. He also has such great disguise that it’s difficult to know until the last second whether you’ll have to run backwards to chase one of his missiles, or if you’re going to have to run forward like a madman. And that’s the key: the opponent can’t tell.

The easiest comparison would be to say that Janowicz is like an NBA guard who has the ability to hit three-point shots, but also the ability to drive to the basket and finish. Thus, the defender has to be very careful not to give him too much space, or he’ll get burned with a jumpshot (a dropper). But the defender can’t be too close to him either, because then he’ll make it easier to get driven by (the groundstroke missiles). There’s a reason NBA players who have this unique skillset earn a lot of money.

And that’s the key to understand Janowicz’s use of drop shots: because he has the groundies to back him up, he can keep his opponent guessing. And a missed dropper is just like a missed forehand. There’s no difference at all, and they cost him exactly the same: one point. If anything, I’d argue that being constantly on your toes because a dropper may come at any point of the rally (including as a return of serve) has to be a far more nerve-wracking experience than waiting for the next forehand missile to arrive.

But enough with the abstract comparisons. Let’s talk about a specific point of the match where all of this was in play:

At 3-all in the second set, Janowicz found himself with a 0-30 advantage on Simon’s serve. And after a deep groundie, he went for a drop shot. It didn’t clear the net, and went on to lose the next three points as well. The commentators (and a part of Twitter) didn’t miss a beat and started openly questioning Janowicz’s tactics.

But using the dropper in that moment was the right play. Janowicz just executed it badly. Simon was way behind the baseline. Janowicz was on his own baseline. Going for a forehand winner would’ve been just as risky. Probably more, since Simon was in a good position to retrieve.

I still fail to see why the dropper is so stigmatized. It’s a finesse shot, like the universally praised volleys. It immediately changes the dynamics of a point, like a well-timed and adored net approach. Yet we can’t wait to chastise someone who goes for a dropper and *gulp* loses the point.

Regardless, Janowicz was unfazed, and his confidence in his game plan would soon be rewarded: At 5-all, the Pole started Simon’s service game with a gorgeous dropper and clinched the all-important break with another one.

A few minutes later, he would be on the floor, crying his eyes out as he clinched a spot in tomorrow’s final. And yes, Janowicz hit a drop shot on match point.

Jerzy Janowicz has made his first ATP final, which just happens to be his first M1000 final as well. There are many higher-ranked players with multiple endorsement deals that can’t say they’ve been in a position to win a M1000 crown.

Jerzy Janowicz has more top 10 wins in this tournament than World number 8 Jo-Wilfred Tsonga does in all of 2012.

This story just keeps getting better and better.

Would you bet against Janowicz tomorrow? Sure, it’s reasonable: the Pole will be playing his eight match in nine days. He’s also playing a top 5 player who is actually playing well, unlike Murray. David Ferrer has been in about 32 more finals than Janowicz. He’s also nearly a decade older.

I wouldn’t do it, though. Simply because what I saw today was a man who fully believed he belonged in this big stage. He knew his time had come.

And he’s right. It really has. 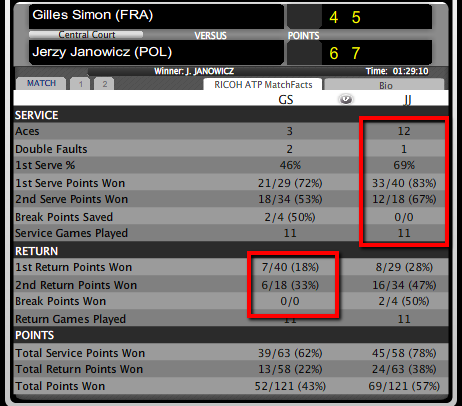