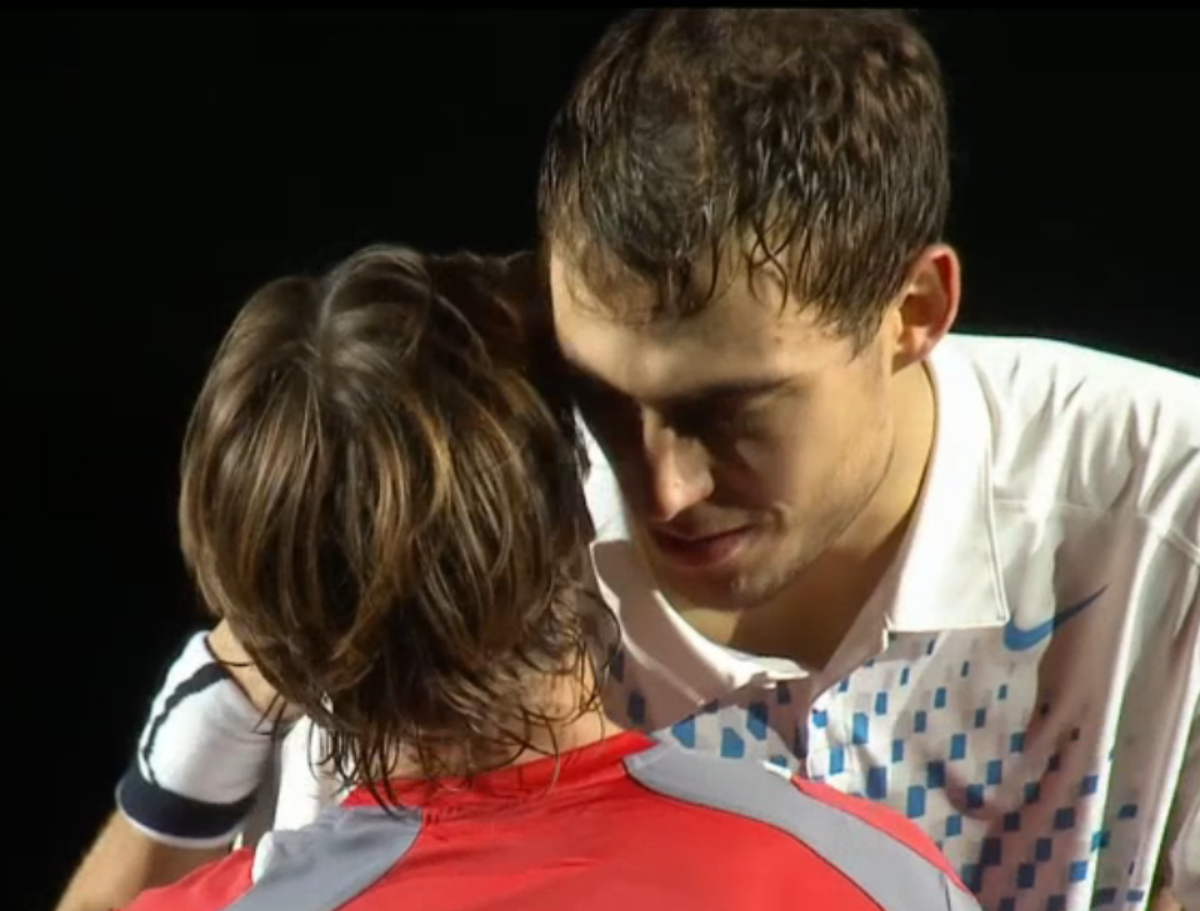 I’ve always been an advocate for players who win the coin toss to choose to serve.

Particularly if you’re a good returner. It just seems so obvious that if things go according to plan and both players hold serve, being the returner at 5-4 is a useful advantage. Earlier in the set, whoever serves second can drop his/her serve and know there will be a few chances to get the break back. On the flip side, the person who serves first always has the peace of mind of knowing that if they get broken at any point in the set, they will have at least one return game to attempt to get their serve back.

Hence why it always baffles me when a player wins the toss and elects to receive. The only scenario where this could be useful is if you’re trying to play mind games with someone who is notorious for choosing to return first, like Rafael Nadal or Andre Agassi. Sure, take them out of their comfort zone.

But even then, you’re stuck serving to stay in the set at 4-5 and 5-6 if the gamble doesn’t pay off at the beginning of the match.

David Ferrer is a very smart tennis player, and at 30 years old, he’s seen almost everything there is to see on a tennis court. He won the toss today and without hesitation elected to serve. Why not give himself the chance to put enormous amounts of pressure on his opponent at 5-4? Particularly when his opponent is a very young and inexperienced debutant on this big stage? It can’t hurt, right?

As it turned out, Ferrer’s decision paid off quite nicely.

The final began auspiciously. Janowicz once again avoided a slow start, even if Ferrer did start the match with a love hold and the young Pole served a double fault in the first service point. However, the Sponsorless One righted the ship immediately and served his way to a straightforward hold to 15.

The first set unfolded like any big final would: cagey rallies, tense looks, and good shots when needed. Ferrer’s strategy was clear: get as many returns in play, push Janowicz back and make the big Pole hit on the run. In terms of the return, the ATP broadcast showed this interesting graph after the fifth game: 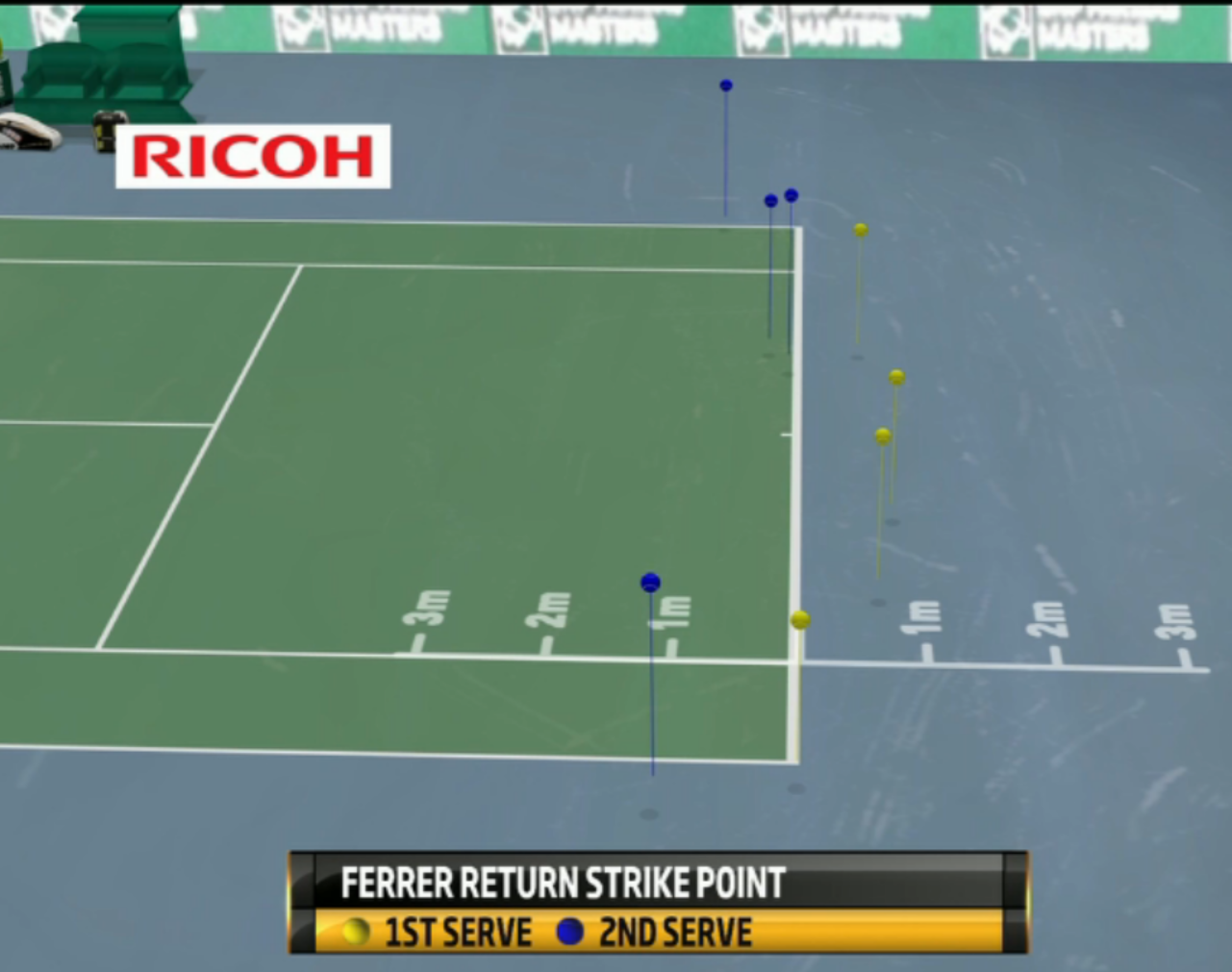 Of course, this is how Ferrer usually returns serve: close to the baseline, trying to catch the ball before it goes past him, given his narrow wingspan. It’s interesting that he stuck to his guns against Janowicz, since it was the first time the pair met on a tennis court. This meant that Ferrer had to guess on a lot of returns, until he got a better read on the Pole’s toss and patterns. As the set progressed, Ferrer was making more and more returns. As a result of that, Janowicz found himself having to deal with second balls that came deeper and with  more pace than he’d seen all week, and more often than not, found it tricky to get them over the net.

Still, the set marched on to it’s seemingly inevitable 5-4 scenario, with Janowicz serving to stay in the set. The Pole started with a wise choice: he went for his trusty slider, and got an ace out of it. But then, the nerves started to show. After a short rally, Janowicz went for a very strange forehand slice winner attempt, a shot he hadn’t tried once in the three previous matches. It landed well wide. Janowicz responded to his own bad decision by going back to his nasty slider serve for a 30-15 edge. Then a great return forced a Janowicz second ball error, where he tried to go for an inside-in forehand that really wasn’t there for him. After another great Ferrer return, the tall Pole faced break point, which in this tricky juncture also meant set point. Janowicz came up with a thunderous ace down the T to stave off the danger, but followed it up with a double-fault. Both men played the next point rather tentatively, and Janowicz cracked first, sending a rally forehand way long. Just like that, the set was over.

Just like yesterday against Michael Llodra, all it took for Ferrer to deflate his opponent (and once again, the crowd, which was siding with the young upstart) was a few good returns. He never wavered from his aggressive return stance, and it paid dividends.

Along with that coin toss decision, of course.

Here’s a nice statistical nugget from the first set: David Ferrer had only 6 unforced errors. Janowicz? 20. The Spaniard had indeed played a pretty flawless first set.

The second stanza got underway, and it followed the same pattern: Ferrer held at love, and Janowicz found himself in a 0-30 hole, but served himself out of trouble with an impressive array of clutch deliveries.

Then came an unexpected twist in a match that by then seemed to be firmly in Ferrer’s grasp: Jerzy Janowicz played his best return game of the match, and got the break after stopping play on a Ferrer shot that seemed like it caught the line. It didn’t – by about 2 millimeters, and the very tall Pole had his first advantage of the day.

Sadly for him, it was short lived.

Just after the previous game ended, the ATP broadcast put this little statistical nugget up:

As we know, the first thing that goes when you have tired legs is your serve. That truism seems particularly apt in Janowicz’s case, since he gets so much power from his lower body on both of his deliveries. Also note how Ferrer’s first serve percentage was going in the opposite direction.

A quick note about Ferrer’s serving: not surprisingly, the Spaniard was very smart in terms of placing his serves. The Valencia winner always tried to go away from Janowicz, trying to avoid him on first serves, and then going for the body on second serves. The result? Janowicz only hit a single return winner in the whole match.

Now, as Janowicz started his quest for consolidating his hard-earned break, his tired legs let him down. He started this key game with a double-fault. Later in the game, another double fault would set up break point, which was clinched by Ferrer when Janowicz sent a forehand down the line well long. Yes, Janowicz showed signs of fatigue, but the Pole also knew that he had to come up with very good serves, since he was up against one of the best returners of serve in the world.

However, Janowicz wasn’t done: showing his newfound mental toughness, he forced himself into a couple of break points in the next game. A clutch Ferrer ace down the T fended saved the first one, and Janowicz went long on a backhand down the line that culminated a strange rally in which there was much slicing and dicing (including another rally forehand slice by Janowicz). But after another Ferrer ace up the T, the break had been consolidated, and it seemed once again that the man from Javea had regained control of this final.

After the deflating last two games, Janowicz finally looked a tired youngster who was playing his eighth match in nine days. Which was understandable. The Pole had also been battling an in-form Ferrer toe-to-toe for over an hour. Janowicz went down 0-40 in what seemed like mere seconds, but managed to survive the first two break points. However, the pressure was too much, and the Sponsorless One gave away the last break of the match with yet another double fault.

After that, Ferrer never flinched on his way to serving out the title, putting the finishing touches on an impeccable performance in what is the biggest tournament win of his life. The World Number 5 carried himself like the classy veteran that he is, rarely losing his temper, and always sticking to his well thought-out game plan. A DVD of this match should be available to anybody wanting to know how you should conduct yourself in a big final.

The two unlikely finalists shared a nice moment at net, and then again during the trophy ceremony. This tournament represented a shift in the way their careers had been going, and most importantly, how they both think of themselves: Ferrer is capping his best season of his life at age 30, and given his tip top physical condition, one wonders what he has in store for next year, now that he’s added that boost of confidence of having finally won a M1000 crown.

For Janowicz, this marks a fantastic way to kick-start what should be a fascinating career in the pro-circuit. Thanks to his good results in Challengers and at Wimbledon, the Paris run will net him a best-ever ranking of 26, which means he’ll be seeded at the Australian Open and won’t have to play qualies in most tournaments next year. He now gets to have two months off to work with his coach and physical trainer and like he said, “come back stronger” next year, ready to achieve his stated goal of making the top 10.

Given his wealth of talent, I don’t think it will take him that long to make up those 16 ranking spots he needs.

Previous Entry: The Picks for November 4, 2012
Next Entry: 10 Things about the 2012 WTA Season You’ve Already Forgotten